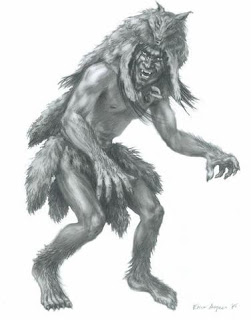 A few months ago, I posted a new race that I created called the Vucari. While I still like what I did with that race, I feel like I could do something a little bit more interesting with them to make them more than just your average "wolf-folk". So, here's a revamped version of the Vucari.

Born with a mysterious connection to the spirits of nature, the Vucari are a race of human-like beings who have the mystical ability to change into wolves. Because of this connection, the Vucari are an incredibly primal people, heavily relying on instinct  and love the thrill of the hunt. Also, like wolves, they are incredibly loyal to their family or "pack" and would do whatever they can to protect the members of their pack.

At first glance, Vucari look just like your average human. However, closer examination reveals their true nature. All Vucari are born with lupine eyes and canines and their finger and toe nails tend to be more claw-like than normal. Male Vucari tend to be rather hairy, particularly on their chest, hands, and feet. Generally, Vucari wear clothing constructed from different animal hides and occasionally wear capes made from the skin of a wolf to show their connection to the lupine spirit.


+2 Dexterity, +2 Wisdom, -2 Intelligence: The Vucari are incredibly quick and wise, but rely more on instinct than intellect.

Medium: Vucari are medium creatures and have no bonuses or penalties due to their size.

Normal Speed: Vucari have a base speed of 30 feet.

Low-Light Vision (Ex): Vucari can see twice as far as humans in conditions of dim light.

Change Shape (Su): A Vucari can assume the appearance and form of a specific single wolf form of the same sex. The Vucari always takes this specific form when he uses this ability. While in wolf form, the Vucari gains the ability to make two claw attacks that deal 1d4 points of damamge each and gain a +10 racial bonus on Disguise checks made to appear as a wolf. Changing shape is a standard action. This ability otherwise functions as beast shape I, except that the Vucari does not adjust his ability scores.

Natural Weapons (Ex): In his natural form, a Vucari has a bite attack that deals 1d4 points of damage.

Silent Hunter (Ex): Vucari reduce the penalty for using Stealth while moving by 5 and can make Stealth checks while running at a -20 penalty (this number includes the penalty reduction from this trait).

This version of the Vucari is heavily influenced by the skin-walker from Native American folklore. The idea of playing a human with the ability to transform into a wolf is pretty cool and I think the concept can lead to some interesting characters. However, I'm still a little bit iffy on the actual abilities and might do some tweaking to them in the near future.
Posted by Unknown at 10:23 AM No comments:

I've always liked the basic idea of "called shots." While I like the general abstraction of combat in Dungeons & Dragons and Pathfinder, sometimes you just want to attack a specific part of an opponent with the hope of dealing just a little more damage or placing a status effect on them to hinder them further. Also, it's just fun to say, "I want to shoot the cyclops in that big eye of his."

However, I have never really liked their execution that much. Generally, when you take a rule and make it more specific and detailed, you also end up making it more complicated. When a rule is more complicated, it has a bad habit of slowing things down at the table. I personally hate when games start to move at a snail's pace because players have to keep referencing the rules to make sure they are doing something right.

For example, Paizo presented a sub-system for called shots in their Ultimate Combat supplement. While I believe this sub-system is well-defined and would add an interesting element to combat, I don't see myself using it anytime in the near future because of the level of detail presented and all of the fiddly bits I would end up forgetting during play.

So, I've been attempting to figure out a way to handle called shots without adding an unnecessary level of complication to an already complicated game like Pathfinder. Fortunately, I think I've discovered an interesting (and easy) way to handle them in the future.

While flipping through old issues of Kobold Quarterly, a new class called the Arquebusier presented in Issue 13 caught my attention. Like the Gunslinger, the Arquebusier is class built around the use of firearms. The class receives an ability named "Called Shot", which I'll present below:


"Called Shot: Beginning at 2nd level, you may attempt to hit a target in a specific area or location with a ranged attack. This attack takes a -4 to hit, but if its successful, it deals an additional 1d6 hp damage."

I really like the simplicity of this rule. Like most called shot rules, the player receives a penalty to their attack roll to represent them targeting a specific area or location on an opponent instead of attack the opponent in a general sense. However, I like how it keeps some level of abstraction by having a set penalty of -4 instead of  a sliding scale of penalties based on the targeted area/location. Also, I like that it allows you to roll a d6 for extra damage, making it feel like a sneak attack the other classes can take advantage as long as they sacrifice some accuracy.

However, I think I might want to add the chance to apply a status effect to your opponent based on the area you've targeted and damaged. Keeping with the spirit of this simplified rule, I think I'd keep the status effects more free-form and based on logic instead of hard-coding certain effects to certain areas/locations on the target's body.

For example, a Gunslinger might decide to shoot an advancing orc in the foot to slow him down. The Gunslinger succeeds, deals the extra damage, and I determine the orc has a 50% to be immediately tripped and will move at half-speed for the remainder of the encounter.

With that being said, I think I might use the rule as is for now just so I can see how it works at the table before I try to weld another element to it that might cause it to become more complicated than I'd like. I guess I'm just going to have to weight and see.
Posted by Unknown at 5:28 AM 2 comments: