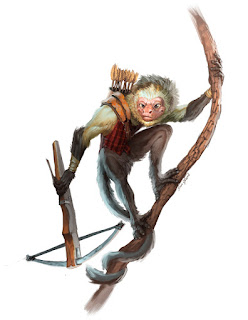 The Arbori are a race of diminutive creatures who inhabit the numerous jungles and tropical forests of the world. Many explorers have mistaken them for a slightly larger breed of monkey at first glance. However, Arbori are more than mere primates.

An average Arbori is roughly the same size as a halfling. Their bodies are covered in a course coat of fur, tending towards a black or brown hue. Occasionally, an Arbori will be born with a white coat. However, this is incredibly rare and many believe an Arbori with such a fur coloration has been touched by the spirits and is meant to do great things. Every Arbori has a long, prehensile tail extending from their lower back and thumb-like appendages upon each foot. Most Arbori wear only a few pieces of clothing, favoring a simple loin cloth, a comfortable vest, or practical harnesses.

Arbori society mostly consists of numerous small villages built into the thick canopies dangling above the jungle floor. These villages tend to be theocratic in nature, with druidic councils guiding the populace both politically and spiritually. These druids are assisted by Arbori bards who collect and chronicle the tribe's history, scribbling these notes upon the back of bark and large leaves. Arbori villages are usually protected by rangers who've been trained to fight within the trees, swinging from branch to branch.

Although the Arbori tend to be a peaceful and reclusive race, they can also be very protective of their home and the forested areas surrounding it. They have been known to fight to the death in order to keep these places safe. They are equally dedicated to their friends and family. 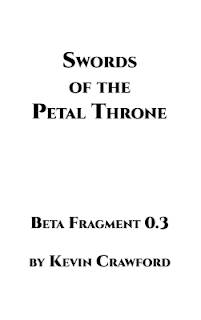 +Kevin Crawford is one of those creators who consistently manages to put out excellent work. Stars Without Number is one of my favorite old school compatible games on the market, and his other projects are equally fantastic (especially Spears of the Dawn).

Recently, Crawford has released a game set in M.A.R. Barker's Tekumel called Swords of the Petal Throne. The version currently available online is a beta test using a version of the rules found in Stars Without Number, but modified to fit Barker's setting. I've only glanced through it, but I'm really digging what I'm seeing.

Swords of the Petal Throne is not an officially licensed work, but merely a fan production. However, there's a possibility we might see that change sometime in the future. I'm definitely routing for that to happen because I'd love throw my money at this awesome game and see what a final, fully illustrated PDF might look like. I'm sure I'm not the only one who feels that way.

Those interested in checking out Crawford's other work can do so HERE. I promise, you won't be disappointed.

I really wish I could take credit for the creation of this term. Unfortunately, Dan from Fear the Boot beat me to the punch. The term FIHAG, as the title of this post illustrates, is an acronym for "Fucker I Hate At Games".

This is the person who you hate to game with for one reason or another. They do something so annoying that you'd rather shove your head into a box filled to the brim with rabid rats than roleplay with them.  Give me the option of either having my balls repeatedly kicked with a steel-toed boot or roll some dice with this fucker, and I'll eagerly spread my legs and tell you to "Go ahead."

Everyone has a FIHAG or two. The antics of these individuals have been burned into your brain, making it incredibly difficult for you to force them out so you can remember something useful like complex math or your significant other's birthday. You might not remember the FIHAG's actual name, but you definitely remember the action that damned them in your mind and have given them a title reflecting that. For example, here are a few of mine:

THE CHALLENGER
The Challenger goes by many different names: The Rules Lawyer, the Setting Lawyer, or the Science/History Lawyer. The Challenger is the person who will challenge the Game Master on every, little thing. "Actually, I believe the bonus for grappling a giant he's sleeping on a bed of large rocks is a +3 instead of a +2. That would be obvious if you read that one sourcebook from that one 3rd party company," or "That incredibly obscure NPC would never do that! They did something that completely contradicts that in one even more obscure novel written by A. R. Spazalore! How could you not know that!"

THE AGENT OF CHAOS
There are some people who just want to watch the world burn, and they also seem to have a lighter ready to set the first fire. These are the people who will do something because it would be "funny", throwing monkey wrenches in every single situation they possibly can. The only seem to have fun when they can sew chaos and ruin any chance you have at having a serious and productive game. It's okay to have fun, but the Agent of Chaos' fun comes at the expense of the other players and the cohesion of the game itself.

FRIENDS I WANT AT GAMES (A.K.A. FIWAGS)
FIWAGS are the counter-point to FIHAGS. These are the people that you want at the gaming table. They're the players who keep you coming back to each session and are a joy to play with. Everyone has a couple of FIHAGs, but they have a handful of FIWAGs as well. They could be the players who are always excited to grab some dice and explore a new part of the world, or the player who is willing to try anything and will go with the flow of the game.

Although this post is about FIHAGS, I feel like I should discuss the opposite side as well. The FIWAGs are what make tabletop gaming an entertaining hobby. However, I would be lying if I said I didn't like bitching about FIHAGs more.

WHO ARE YOUR FIHAGS & FIWAGS?
Now it's your turn. Who are your FIHAGs & FIWAGs? What is the trait you either hate or like about them? Why do you hate or like this trait so much? Leave your answers in the comments blow. I'd love to know.
Posted by Unknown at 12:00 AM No comments:

Email ThisBlogThis!Share to TwitterShare to FacebookShare to Pinterest
Labels: Opinion

Tomorrow, I'll be kicking off my first 5e campaign. The setting will be the Elsir Vale region depicted in the old 3.5 module Red Hand of Doom, with a handful of modifications and alterations to fit the campaign's needs. This will most likely be either a bi-weekly or monthly game to better fit everyone's schedule, meaning I'll probably go for a more episodic narrative.

Because this will be my first campaign, I decided to share the house rules I'll be using with all of you. I've decided to keep this list pretty short, wanting to run most things by the book for the time being. I want to keep things simple for both my players and myself for the time being. I'll most likely update this list in the future if I make any additions or cut something from the list.


HOUSE RULES
Ability Score Generation
Players will generate their character's ability scores by rolling 4d6, dropping the die with the lowest result, and adding the remaining three together. They'll repeat this until they have six numbers, then assign them to their abilities as they see fit.

Alignment
Players can select any non-evil alignment for their characters without needing Dungeon Master permission.

Healer's Kit Dependency
Characters can't spend any Hit Dice after finishing a short rest until someone expends one use of a healer's kit to bandage and treat the character's wounds. This variant rule can be found on pg. 266 of the Dungeon Master's Guide.

Cleaving Through Creatures
When a melee attack reduces an undamaged creature to 0 hit points, any excess damage from that attack might carry over to another creature nearby. The attacker targets another creature within reach and, if the original attack roll can hit it, applies any remaining damage to it. If that creature was undamaged and is likewise reduced to 0 hit points, repeat this process, carrying over the remaining damage until there are no valid targets, or until the damage carried over fails to reduce an undamaged creature to 0 hit points. This variant rule can be found on pg. 272 of the Dungeon Master's Guide.

Critical Failures
When a character receives an unmodified result of 1 on an attack roll, they have critically failed. This fumbled attack gives the next attack roll made against them advantage.

Identifying a Magic Item
A character can focus on one magic item during a long rest, while being in physical contact with the item. At the end of the rest, the character learns the item's properties, as well as how to use them. This rule replaces the default rule for identifying a magic item.


THOUGHTS?
Feel free to leave any comments about the house rules presented above. I tried to keep things short and simple, but I will definitely be evolving this list as the campaign goes forward. Go ahead and share some of your own 5th Edition house rules in the comments below. I'd love to see how other people have tinkered with the mechanics to personalize their own experiences with it.
Posted by Unknown at 5:19 PM No comments: