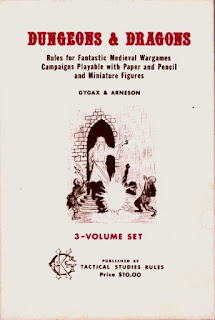 Yesterday, Wizards of the Coast made the PDFs for the original edition of Dungeons & Dragons available again.

These are based upon the Original Collector's Edition released in 2013. For $9.99, you will get all three books contained in the original box set plus the Reference Sheets booklet.

I'll admit something here: I've never played OD&D. I came into the hobby with 3.5, and my experience with older versions of the game have been rather limited until very recently.

However, I've always wanted to give the version presented in those three, white booklets a try at some point. This might be the perfect opportunity to do so, allowing me to check that off my gaming bucket list.

Those interested in purchasing the PDFs can find them at D&D Classics. $10 for a piece of gaming history is a pretty sweet deal if you ask me.
Posted by Unknown at 7:47 AM No comments: 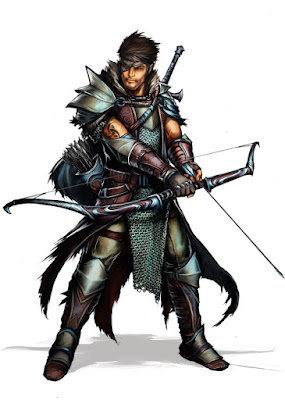 The tracking of ammunition is very similar to the management of encumbrance in Dungeons & Dragons. They're both rules that should be used do to the effect they'll have on the adventuring lifestyle. However, I can count the number of groups that actually enforce these rules as written on one hand and still have fingers left over.

The most common reason for this is it tends to bog down the actual gameplay with a particularly boring level of bookkeeping, especially in regards to encumbrance.

This inspires people such as myself to attempt to create alternate ways to implement these rules that do away with the negative aspects while maintaining the interesting elements.

Today, I'm going to present a house rule for ammo tracking that's inspired by the Ammo tag from Dungeon World.

Instead of tracking individual pieces of ammunition, players will purchase a specific bundle based upon the weapon being used. Bows use a quiver of arrows, crossbows use a case of bolts, and a sling uses a pouch of bullets. The price of these bundles match the prices for the ammunition listed in the Player's Handbook (pg. 150).

Every time the owner of the bundle rolls a natural 1 on an attack roll with the appropriate weapon, she will lower the bundle's rating down by 1. When this rating hits 0, the character has run out of ammunition and must purchase a new bundle.

I believe this rule does a good job at keeping the actual tracking process incredibly simple. All you need to do to see if you have ammo left is look at the rating of your bundle. Furthermore, you only decrease that rating on a critical failure instead of every attack roll means you will not have to worry about it too much during the actual session.

However, there is still an annoying wrinkle that I have yet to iron out: magical ammunition. There's a part of me that wants to air on the side of caution and just keep track of it as normal due to most characters rarely having a large amount of it at a time, but another part of me wants to keep things uniform. Maybe one could have "magical bundles" with a much lower rating to represent the rarity. I'll come back to this when I find a satisfying answer to this situation.
Posted by Unknown at 6:31 AM No comments:

Wizards of the Coast finally did it.

They finally released a System Reference Document (SRD) for the 5th Edition of Dungeons & Dragons under the OGL (version 1.0a).

This is a very positive development in my book. I've been begging WoTC to release something like this since Day One. I wish they would have come out with this sooner, but that's really just me picking some nits out of the situation.

I've been flipping through it over the past few minutes, and I'm happy to see so much content presented within it. I'll admit, part of me worried the Basic Rules would be turned into the SRD, but I'm glad that's not the case.

Anyway, feel free to click the link above to check out the PDF of the new SRD.

Posted by Unknown at 8:56 PM No comments: