My Problem With Dragons 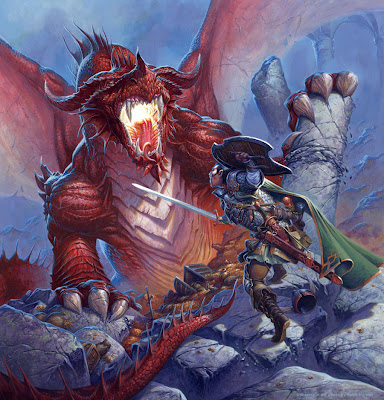 One of the things that I hate about modern fantasy games and stories is the demystification of dragons. In my opinion, dragons should be something utterly terrifying and only high-level characters should be able to even stand a chance of defeating them. However, for some strange reason, I keep seeing 1st-level adventures with  dragons as their final bosses who never seem to use the things that make a dragon such a formidable foe.

Now, I understand why these scaly titans keep making appearances in these 1st-level modules. The majority of these adventures are meant to be introductions to the game and when most people think about the fantasy genre, they tend to think of brave warriors fighting a vicious dragon.

However, when you try to shoehorn a dragon into a 1st-level adventure, you will have to weaken it and make it something the characters can realistically defeat if they are smart and the dice aren't rolling horribly. The problem with this is that you are now showing the players that dragons aren't that scary and even a group of 1st-level adventurers can take them with some planning and forethought.

So, I believe we need to stop putting chromatic and metallic dragons into 1st-level dungeons. Dragons need to be the thing that only powerful adventurers can possibly take. They need to be the creatures that young, low-level adventurers will run in terror from because facing it would be almost certain death. They need to be monsters that you have to come up with a really good plan if you even want a chance to defeat it, not just swing your swords and cast a few spells.